WORKING FOR THE MOUSE 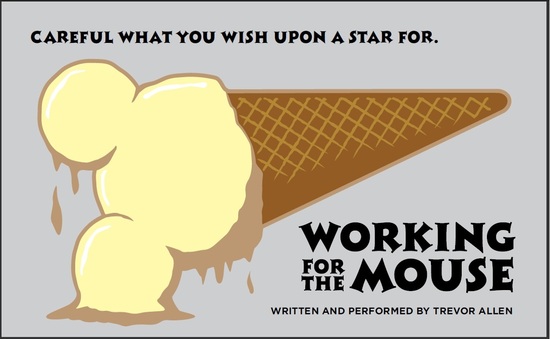 What really goes on at the Happiest Place on Earth? Trevor Allen once played Pluto and the Mad Hatter at Disneyland. He returns with tales of quirky co-workers, militant managers, and backstage debauchery in this unique coming-of-age tale. Working for the Mouse blows pixie dust in your eyes while offering a hilarious glimpse behind the ears of the Magic Kingdom. Voted Best of the SF Fringe Festival, it’s garnered sold-out houses and critical acclaim in San Francisco and Berkeley and around the Bay Area without once getting a cease-and-desist order from Disney. Be careful what you wish upon a star for… it just might come true.

Trevor Allen is an award winning Bay Area playwright. Productions include: Lolita Roadtrip (San Jose Stage Company).The Creature (Black Box Theatre Company, BACC award) Tenders in the Fog (San Jose Stage Company, Dean Goodman Award, Original Script), Working for the Mouse! (SF Fringe Festival, Impact Theatre), 49 Miles (Crowded Fire Theater), Chain Reactions, (Theatre of Yugen, CAFÉ and The Cutting Ball). He received a San Francisco Arts Commission grant for his play, Zoo Logic. He is a Bay Area Playwrights Festival alumni and his play, One Stone (Einstein), a collaboration with Lunatique Fantastique was developed through their “Incubator” and “In the Rough” programs. Two of his plays have received the SF Fringe Festival’s “Best Of” awards. His short play, Mamlet, won American Conservatory Theatre’s “Write like David Mamet” contest. He received PlayGround’s Emerging Playwright Award, Playwriting Fellowship and two Alumni full length play commissions for Lolita Roadtrip and Golden Gate Fair. He was a Playwright in Residence at the Djerassi Resident Artists Program. He is currently working on scripts for Valley of Sand, a new play about Silicon Valley originally commissioned by San Jose Repertory Theatre and PlayGround, A Treasured Island, his adaptation of Robert Louis Stevenson’s novel set in a Children’s hospital and editing a book length collection of five of his professionally produced plays for EXIT Press. He holds a BA in Theatre from UCLA and a MFA in Creative Writing from SFSU. He is a member of the Dramatist’s Guild of America.

“Amusing, skillful, and contagiously warmhearted… You may not believe your ears (or Pluto’s) on this unofficial guided tour behind the scenes… C is for ‘See it real soon.’”
– SF Bay Guardian

“Fascinating… Infectious… He’s got more than a magic bag full of fun anecdotes, and the charisma of Peter Pan to pull off telling them.”
– SF Examiner

“Vivid… Touching… If you’ve ever had a job that looked like a dream from the outside and a fevered hallucination from the inside, you’ll want to see Working for the Mouse… Allen shares his Disneyland experience with warmth, style, and tremendous humor.”
– East Bay Express

Working for the Mouse links to full reviews: